Chay’s first major sailing event was to attempt to sail around the world on a Kingfisher 30. However, it became apparent that the standard production yacht was unsuitable for the Roaring 40s having heavy bilge keels and the attempt was abandoned.

In 1969 he began to plan in earnest to sail the “wrong way” round the world.

Sponsorship was vital to the success of the venture and Chay secured the backing of The British Steel Corporation with the help of Terry Bond, a brilliant young PR consultant. This experience of gaining and developing a relationship with a major corporation was to shape not only Chay’s personal exploits in the following years but his future business initiatives. 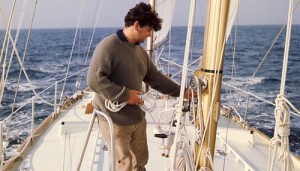 On 18 October 1970 he left Southampton on board the 59ft ketch “British Steel”. Two hundred and ninety two days later he returned to a heroes welcome. Thousands cheered “British Steel” home and their Royal Highnesses Prince Philip, Prince Charles and Princess Anne were there as was the then Prime Minister, Rt Hon Edward Heath.

Chay Blyth became the first person to sail non-stop around the world against the prevailing winds and currents. Sir Francis Chichester commented before the attempt that he thought the voyage was impossible and on completion it became known as “the impossible voyage”. The Times newspaper in London described it as “The most outstanding passage ever made by one man alone”.

In recognition of his achievement, he was made a Commander of The British Empire (CBE) and was voted Yachtsman of the Year by the Yachting Journalists Association. He was also voted of Man of the Year.